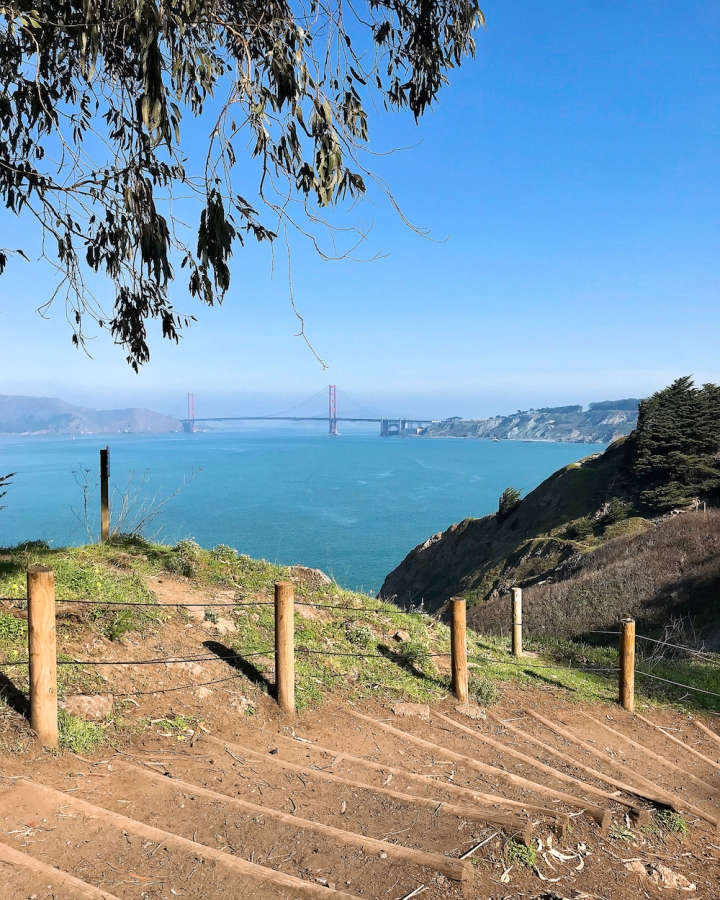 San Francisco is surrounded by beautiful nature and offers great hiking trails all around the city but there is definitely nothing like Lands End Trail.

Lands End is located in the northwest corner of the city offering spectacular views of the Golden Gate, Pacific Ocean and Marine Headlands on the other side of the bay.

If you are visiting San Francisco, Lands End Trail is a must see!

Lands End on a map

Length: 1.5 miles (2.4km)
Difficulty: Moderate. Most of the trail is flat but includes some steeper hills and stairs along the way.
Duration: The hike usually takes about an hour but as there are so many things to see along the way, it’s good to reserve some extra time to stop and take photos.
Things to see: Golden Gate Bridge from many different angles, Lands End Labyrinth, Sutro Baths, USS San Francisco Memorial and of course amazing views of the bay.

There are two ways to get to the trail. The first option is to start from Lands End Lookout Point where you can also find a big parking lot in case you are driving. There are also busses that run from the city to Lands End such as Bus 38 and 38R, the former being a quicker option with less stops. Alternatively you can catch and Uber or Lyft to either of the trail heads.

You can also start hiking from Eagles Point which starts right from the edge of Sea Cliff neighborhood. I personally like to start the trail from this end as I like to finish the hike at Lands End Lookout and watch the sunset there. Just a few minute walk from Eagles Point trailhead you will find Lincoln Park Steps decorated in mosaic style. The steps are definitely worth a little extra loop.

The trail goes along the cliff the whole way offering amazing views of the ocean. At the start of the hike (when you start from Eagles Point) you will see two of San Francisco’s well known beaches: Bakers’s Beach and China Beach. Baker’s Beach is very popular among San Franciscans and tourists as it offers great views of the Golden Gate Bridge. China Beach is right next to Baker’s Beach. This small beach is often called a hidden gem of San Francisco with less crowds but having visited the beach few times I don’t really agree – both times the beach has been packed.

You will see many warning signs of dangerous cliffs and hazardous surf along the trail. Despite the warnings you will often see surfers in the water. I usually stop here for a few minutes to watch surfers far below in the water.

San Francisco Bay Area is known for its strong currents, fog and rough sea. The water temperature is also pretty cold as it only reaches to 15 degrees (59 F) during summer months. That’s probably why you hardly ever see anyone surfing without a wetsuit.

Around half way through the trail, you can take another trail down towards the ocean to Lands End Labyrinth. The walk down (and back up) takes quite a few extra steps but it’s definitely worth it.

Created by Eduardo Aguilera in 2004, the Labyrinth lies on a flat rock terrace overlooking Golden Gate Bridge. This is one of the greatest views of the bridge and a good place to stop and have a break along the way.

We finished our hike at Sutro Baths which lies just below Lands End Lookout Point. Built in 1896, Sutro Baths was once a saltwater swimming pool complex. Today you will only see the ruins but if you would like to know more about the baths checkout Lands End Lookout Cafe. The cafe has countless photographs and information about Sutro Baths and you can grab a bite to eat after your hike.

Behind the ruins of Sutro Baths lies the legendary Cliff House. The original Cliff House was destroyed by fire in 1907 and since then the building has been rebuilt several times. The current version was rebuilt in the 2000s and features a restaurant bar which both offer great views of the ocean.

One of the best places to watch sunset in San Francisco is here at Lands End Lookout Point. There is nothing nicer than ending your hike here during sunset. The Cliff House is also a great place to watch the sun go down or grab a drink and dinner while enjoying the view of the ocean.

Other Great Hikes in San Francisco

Lands End Trail is just one of the great hikes in San Francisco. You can also find other fantastic hikes at Twin Peaks, Presidio Park or on the other side of the bridge at Marin Headlands.

If you are willing to explore a little further, you should head to Muir Woods National Park just 30min drive north from San Francisco. Read more about Muir Woods here!

What are your favorite hikes in San Francisco?

Save it for future reference!
Pin it by clicking below

2 thoughts on “Lands End Trail: The Most Iconic Hike in San Francisco”